In the presentation of Brave New World Huxley has used an outstanding range of imagery, to create numerous atmospheres. He does this by using metaphors, similes and increasing amounts of animal imagery. By using a variety of techniques, Huxley has accomplished writing a novel that contains a broad range of issues from loneliness and death to powerful lust and the scientific creation of life both abused or embraced by the characters involved.
The first paragraph (chapter 1.) of Brave New World introduces us to a very grave atmosphere. Huxley uses the provocative imagery of death to create a sensation of solitude for the reader, with words such as “pale”, “corpse-coloured”, “cold”, “frozen”, “dead”, “harsh”, “thin” and “ghost.”
The most common imagery present in the novel is Huxley's extensive use of animal imagery. Early in the novel, he describes the interactions between hatchery nurses, their equipment and the individual embryos with stark references to animals. He writes about the use of "blood surrogate." It apears that he is trying to convey is that as these embryos (in test tubes) have no umbilical cord and therefore, artificial nutrients (hormones, cells, etc ;) that are derived from animals then transferred into the embryo for development. These metaphors continue to describe the behaviours of people in general or even individuals. He uses the expression "straight from the horse’s mouth"on two ocassions in this chapter. This emphasises the relationship between the students and the director, and that he has had an intergral part in the creation of this new social structure and the means of creating human life.
In chapter ten, Huxley begins the introduction of a new metaphor. He reffers to the hatcheries (a building responsible for the mass production of test tube babies) as a bee hive. With the use of this new metaphor, he attempts to create a new emotion within the reader, for the first and only time within the novel, things appear bright and lively. The atmosphere is warmer, inviting and even friendly. Huxley even incorporates onomatopoeia by the use of "Buzz! Buzz!" to enhance this new atmosphere and emphasize the existance of other life. (aside from humans.) Not only does it reflect the atmosphere but the bee-hive metaphor reflects the focused work of workers in the hatcheries and contributes to the vast range of animal imagery.
The content of imagery Huxley has provided is both strange and wonderful. His animal imagery makes the book feel intentionally artificial. He also uses other aspects such as onomatopoeia and contrast. This has helped Huxley to make his novel all the more enjoyable and vivid to the reader.

A replica of the world Huxley describes in his novel. Found at Oley's Dystopic Blog (click image to view) 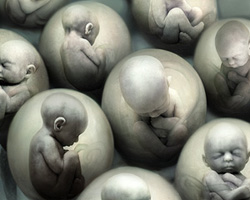 The manufacturing and cloning of people. (copyright to jenna's blog. click image to view.)